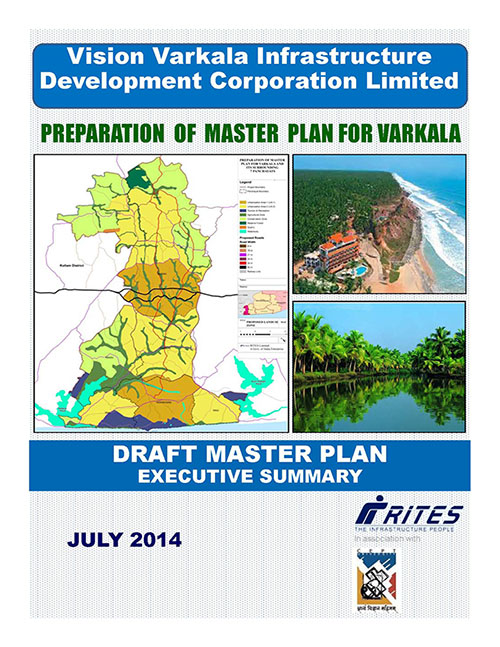 Varkala, a coastal town, situated at a distance of about 50 km north of Thiruvananthapuram and 37 km south of Kollam city is one of the important religious and tourist destinations in Kerala. It is visited by lakhs of foreign and domestic tourists / pilgrims regularly as well as during the special occasions both from India and abroad. In view of Varkala’s enormous tourist potential, the Government of Kerala has initiated the process of preparing the Master Plan‐2041 for integrated development of this area through a number of infrastructure development projects for meeting the requirement of making Varkala a tourists’ paradise, both for the domestic and foreign tourists. To achieve this objective, Government of Kerala through its arm; Vision Varkala Infrastructure Development Corporation Ltd., has engaged RITES Ltd., a Government of India Enterprise, for preparing the Master Plan‐2041.

The area of Varkala Municipality and seven Panchayats namely; Pallickal, Madavoor, Navaikulam, Elakamon, Chemmaruthy, Vettoor and Edava constitute the project area. As per Government records, it has an area of about 142.78 sq.km., whereas, after Geo‐referencing the satellite images for preparing digital base map in GIS environs, the total area measures 130.43 sq.km. For all calculations leading to formulation of Master Plan‐2041, the computed area of 130.43 sq km. has been adopted.The project area is well connected by roads, railways and the airways. The National Highway NH‐47 connecting Kollam to Kanyakumari passes through it. Rail connectivity is provided by Southern Railways in this region. The international airport of Thiruvananthapuram is only 55 km which is linked by NH‐47.

The total population of the project area in 2011 was around 2.22 lakh persons. The average population density is around 17.1 pph which is quite low as compared to the district density (49 pph) and the State average of 65.4 pph (Census 2011).

POPULATION PROJECTIONS FOR THE PROJECT AREA

The accommodation unit requirements in Varkala by the year 2041 have been calculated considering the inflow of tourists during weekdays and weekends, both during peak and lean seasons, which comes to around 8,000 rooms by 2041. Apart from these, there will be day time tourists and pilgrims that shall be visiting the place during festivals or religious occasions.

Assuming the average employee‐to‐room ratio of 1.6 for all categories of hotels

and home stays in Varkala, the total employment in Varkala would be around 25,600+ jobs in the next 30 years i.e. by year 2041 in the tourism industry.

EXISTING LAND USE IN THE PROJECT AREA

The existing land use study shows that nearly 7.06 sq.km (5.4%) of the total project area is under Residential (Built) category, while about 0.43 sq.km (0.3%) and 0.11 sq.km (0.1%) is under Commercial (Built) category and Industrial (Built) category, respectively. The combined area covered under land use categories namely Vacant Open Area and Vacant Vegetal Area measures about 63.85 sq.km (49%), while under Plantation and Agriculture it is about 38.41 sq. km. (29.4%).

The major concerns identified were:

VISION AND MISSION OF THE MASTER PLAN

The main vision of the Master Plan is: “Developing Varkala as the one of the most preferred and eco‐friendly tourist destinations and integrating it with needs of local community, improving quality of life and providing more employment opportunities with least interference in the natural environment”.

The ultimate mission is: “Attracting investments in a paradigm of regulated growth and development, at the designated nodes within the project area, by involving all the stakeholders‐both public and the private sectors for vision realization”

ZONATION OF THE PROJECT AREA

Since this is the first planning effort of developing the project area comprising Municipal and Panchayat areas, the development agency requires flexibility of attracting the investments at places with a few restrictions specified in the Development Control Regulations. It is the foremost requirement of the private investor, because the first choice of investor is to develop the area where land is accessible, cheaper and has the marketing potentials. Such flexibilities are not available in the strict land use zones.

Hence, the entire project area has been dived into two zones described as under;

i. Urbanization Area‐1 (UA‐1), is the area that will have comparatively high intensity of development i.e. higher FSI and developmental permission charges and the development permissions linked with the hierarchy of roads as specified in the Development Control Regulations,

ii. Urbanization Area‐2 (UA‐2), is the area that will have lower intensity of development

i.e. lower FSI and developmental charges than the UA‐1.

Since the Zonation is based on the existing potentials to attract the investment, equally important is attaining the balanced growth and development of the project area. For this purpose, the project area within the two zones, has been designated for polycentric development as nodes of investments listed as under:

The broad principles on which the Master Plan, 2041 has been formulated are as follows:

The objective of having a tourist circuit is to increase the total number of visit to all destinations on the circuit on one hand and to provide tourist the attraction of all the destinations located on the circuit. It is in this reference it is suggested to cover various tourist destinations in the project area including Kappil Lake – Shivagiri Mutt – Janardhan Swami temple ‐Varkala Cliff – Golden Island – Anjengo Fort and other important tourist places in and around Varkala as a part of the tourist circuit.

The important tourist sites that have been identified for development / upgradation / renovation so as to attract more tourists by creating better infrastructure facilities have been suggested as under:

Apart from these projects, the other projects mentioned in Vision Varkala 2020 have also been suggested to be developed after carrying out appropriate feasibilities of each of these projects.

With the preparation of the Master Plan 2041, it is essential to make institutional arrangements for the implementation of the Master Plan. In view of the limitations of the Vision Varkala Infrastructure Development Corporation Ltd relating to the granting of various development permissions under the laws applicable to the project area and the limited trained human resource, the following are the proposals for effective and speedy clearances of the permissions:‐

As stated in the institutional arrangement, Vision Varkala Infrastructure Development Corporation Ltd (ViVIDC) will be constraint by limited human resource. It will also have resource constraint and technological limitations. Therefore, to keep pace with the required infrastructure and to clear the backlog, the option available is adopting PPP model. Despite its pros and cons, this joint effort of government agency and of private sector partnership, the benefit of private sector funds and expertise can be harnessed.

The repercussion of such an arrangement is reflected in the cost of using the service to be borne exclusively by the users of the service. In such a paradigm, the responsibility of the public sector is to:

i. Providing land to the partner for infrastructure development free from all encumbrances;

ii. Where only right‐of‐way is involved on the ground, above the ground, or below the ground, the responsibility is of public sector to enable or facilitate all approvals or clearances from various government agencies/Departments,

iii. Drafting of an agreement that meets the requirement of the partners and ultimately builds the financial health of the public sector agency and builds the capacity of the agency to take future projects on its own strength,

The project where private sector can be involved, inter‐alia, could be the following;

i. Infrastructure for promotion of tourism as identified in the Varkala Master Plan 2041 such as;

a. New roads after acquisition of land through  a carefully drafted     concessionaire agreement,
b. Existing road widening, strengthening and maintenance thereof